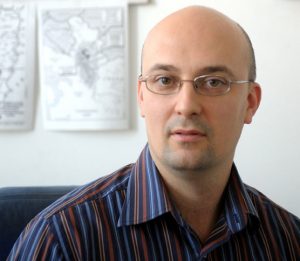 Slobodan Janković is Senior Research Fellow and Head of the Centre for Neighbouring and Mediterranean countries at the Institute of International Politics and Economics. He joined the Institute of International Politics and Economics in 2006, where his main areas of academic interest include the Middle East politics, relations between big powers and the MENA region countries, Italian political history, Middle East peace process, borders in the Balkans and on migration trends.

Dr Janković is Deputy Editor-in-Chief of IIPE′s quarterly journal The Review of International Affairs, where he previously was Editor-in-Chief (2019–2020). Slobodan obtained his PhD on Obstacles to the Middle East Peace process at the Faculty of Political Science, University of Belgrade (2014). He had earned his MA degree in Geopolitics and Global Security at the Faculty of Politics, University La Sapienza in Rome (thesis: Radical Islam in Turkey), and had graduated from the Department of History, Faculty of Letters, University Roma TRE in Rome, Italy.

Janković completed the course for international officers at SIOI (Societa` Italiana per l’Organizzazione Internazionale), with the following thesis: “The Western Balkans in European integrations”. He also completed several seminars and courses: the Summer School on Conflict Management and Negotiation, on Logical Framework Approach, on writing EU project proposals and on Labour Migration Policy and Practice, Belgrade.

Slobodan was co-coordinator of the IPA project “Debating Serbia’s European Future: The Voice of Civil Society in Decision-Making” (2010) conducted by IIPE and the European Institute from Sofia.

He is the author of dozens of articles on Middle East, on Balkan politics and Italian contemporary history; he was the co-editor of proceedings entitled Elements of Serbia’s Foreign Policy Strategy.

Slobodan was Deputy Editor-in-Chief of IIPE′s quarterly journal published in Serbian Međunarodna politika (2015–2018). Since 2008 Janković has been a member of the Editorial Board of the monthly Geopolitika, Serbian review of geopolitics and culture. Slobodan is a member of the CSOs the Serbian Scientific Centre and of the Centre for Conservative Studies.

He is proficient in Italian and English and has a good passive knowledge of Russian and French.