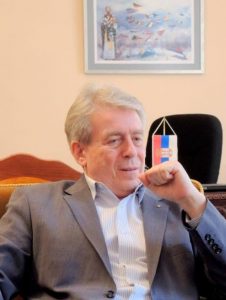 Professor Branislav Đorđević was appointed Director of Institute of International Politics and Economics in January 2015. The main field of his research interest is international security.

He defended his doctoral thesis Modern Serbia′s Military Thought as the Outcome of Contemporary War Skills at the Military Academy in Belgrade (1999), where he had also obtained his MA (1991) and BA (1981).

Up to 2007 Professor Đorđević was a professional military officer and he ended his military career as colonel. He was director of the Institute of Strategic Studies at the Serbian Ministry of Defence, a member of the cabinet of the Chief of the General Staff, and also served as a troop officer in the Yugoslav National Army. He completed the School of National Defence (General Staff level) in 2000. During his academic career, Professor Đorđević was Lecturer in Security Studies at the Faculty of Business Studies and Law, Director of Centre for Strategic Studies and Lecturer in the same field at the Academy of Diplomacy and Security, and Director of Institute of New Technologies, Megatrend University, Belgrade.

He was Editor-in-Chief of IIPEʼs journal International Problems (2015–2018), the oldest academic journal in the Balkans dedicated to IR.

He authored and co-authored fourteen monographs and dozens of research articles in academic journals and collections of papers. Professor Branislav Đorđević has participated in several domestic and international scientific conferences, round tables, and panel discussions. He has managed a few research projects. For his contribution to military science, he received the Republic of Serbia’s “Dragojlo Dudić” award for 1998 and the “Vojvoda Živojin Mišić” gold medallion for 2001.