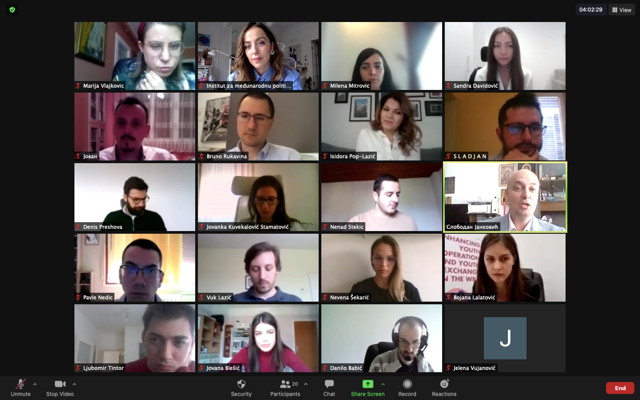 Institute of International Politics and Economics organised an online discussion “The Youth initiative – The role and perspectives of regional academic cooperation” that gathered young researchers from the region in the field of social sciences and humanities (Serbia, Croatia, North Macedonia, Montenegro, etc).

The introductory speeches were given by Prof. Branislav Đorđević, IIPE Director, Nikola Stojanović, Foreign Policy Advisor to the Prime Minister of the Republic of Serbia, as well as Dr. Slobodan Janković, Head of IIPE Centre for Neighbourhood and Mediterranean.

The discussion was divided into two panels. The main topic of the first panel, “From Disintegration to Integration: Thirty Years Later”, included a discussion on the political as well as historical perspective on the relations in the region, in the light of the disintegration of the SFR Yugoslavia. Through the analysis of integration and disintegration processes in the region, the panelists gave a meaningful and critical overview of contemporary issues in the relations between the people living in the Balkans. The focus of the second panel was on the importance and the role of regional scientific cooperation as a strong stimulus for sincere dialogue and cooperation. The panelists underlined the importance of academic cooperation in the light of deepening the European integration process, on the one hand, as well as the legal cooperation in order to harmonize judicial and legal culture in the countries of the region, on the other. After a fruitful discussion which followed after each panel, a common conclusion was reached underling that the active regional cooperation between scientific institutions and young scientific researchers is necessary and that the meeting was an excellent example and encouragement of such cooperation.