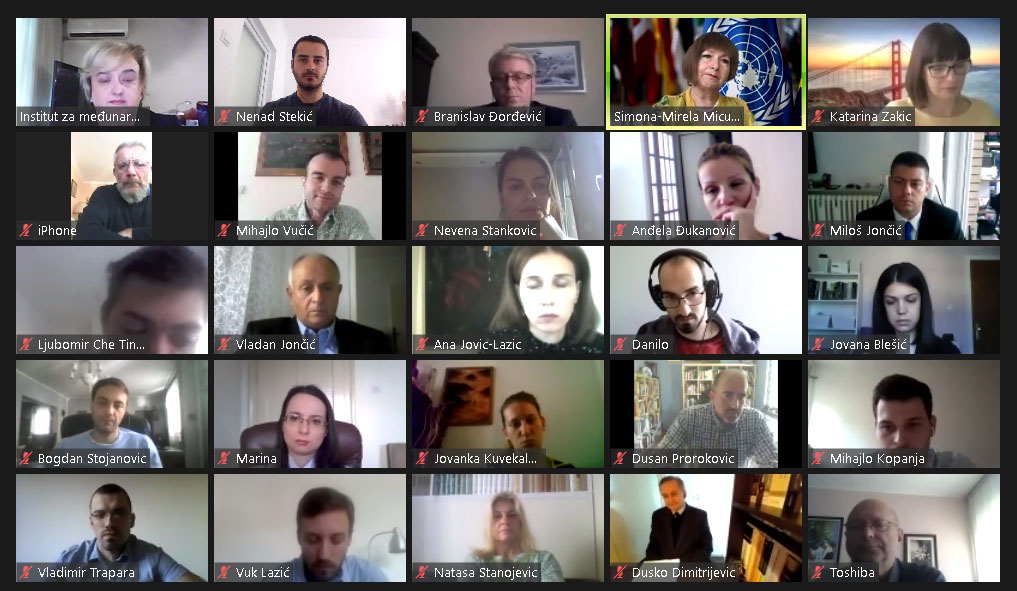 Institute of International Politics and Economics organised an online conference “United Nations: Between Reality and Vision”, in cooperation with the Serbian Ministry of Foreign Affairs, the United Nations Secretary-Generalʼs Special Representative and the United Nations Permanent Coordinator in the Republic of Serbia. During the opening ceremony, welcoming speeches were delivered by Professor Branislav Đorđević, IIPE Director, Ms Simona-Mirela Miculescu, Special Representative of the UN Secretary-General and Head of the UN Office in the Republic of Serbia, Ms Françoise Jacob, UN Resident Coordinator in the Republic of Serbia, Professor Vladimir Popović, State Secretary of the Ministry of Education, Science and Technological Development, and Ambassador Aleksandar Tasić, Assistant Minister of Foreign Affairs – Sector for Multilateral Cooperation. The speakers pointed out the importance of organising the academic conference on this topic, shared their views on the development and mission of the world organisation, and provided a brief review of future activities. During the working part of the conference, researchers of the IIPE Centre for International Organisations and International Law analysed various aspects of the United Nations system and potential reforms. The presentations were followed by a discussion, and the conference was attended by representatives of the Ministry of Foreign Affairs, academicians, scholars and IIPE researchers.