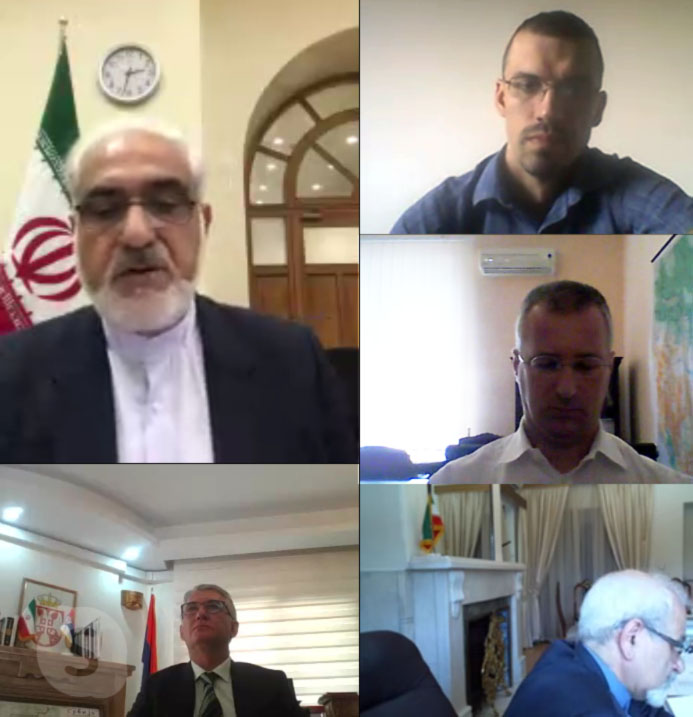 The Institute for Political and International Studies (IPIS), Tehran, and the Institute of International Politics and Economics (IIPE), Belgrade, organised a joint webinar on Iran, Serbia and the World under Pandemic, as the first step towards revitalisation of scientific cooperation initiated in the 2000s. The webinar was opened by Dr Saeed Khatibzadeh, Vice-President for Research at IPIS, Dr Srđan Korać, Deputy Director at IIPE, HE Mr Rashid Hassanpour, Iran’s Ambassador to Serbia, and HE Dragan Todorović, Serbia’s Ambassador to Iran. Besides researchers from the two institutes, speakers were HE Mr Mehdi Abedi, Director for East Europe at the Iranian Ministry of Foreign Affairs, and Mr Miloš Perišić, Head of Department for Africa and the Middle East at the Serbian Ministry of Foreign Affairs.

In the first panel, participants identified the main challenges for Iran-Serbia bilateral relations posed by the Coronavirus pandemics and delved into conceiving the plausible scenarios for boosting development of Iran-Serbia relations and in which fields. The debate centred around international relations theory and practice in Corona and Post-Coronavirus age, that is what would the post-Corona world look like and what would be the future prospects and possible scenarios in terms of having systemic and/or transformative effects on world politics. The second panel discussed the current state of affairs in the regions of the Near East, particularly Persian Gulf, the Western Balkans and the EU. The participants shared their views on the impact of current global turmoil on the Western Balkan countries – primarily in perspectives and perceptions of the supranational dilemmas of the European Union as well as great powers politics towards the region, and on how the Corona-virus shapes power politics and national economies of the Persian Gulf countries.

The representatives of the two research organisations agreed to deepen further cooperation in 2021 by jointly producing an edited volume, with papers to be contributed largely by Iranian and Serbian researchers of international relations, and by organising another joint webinar.