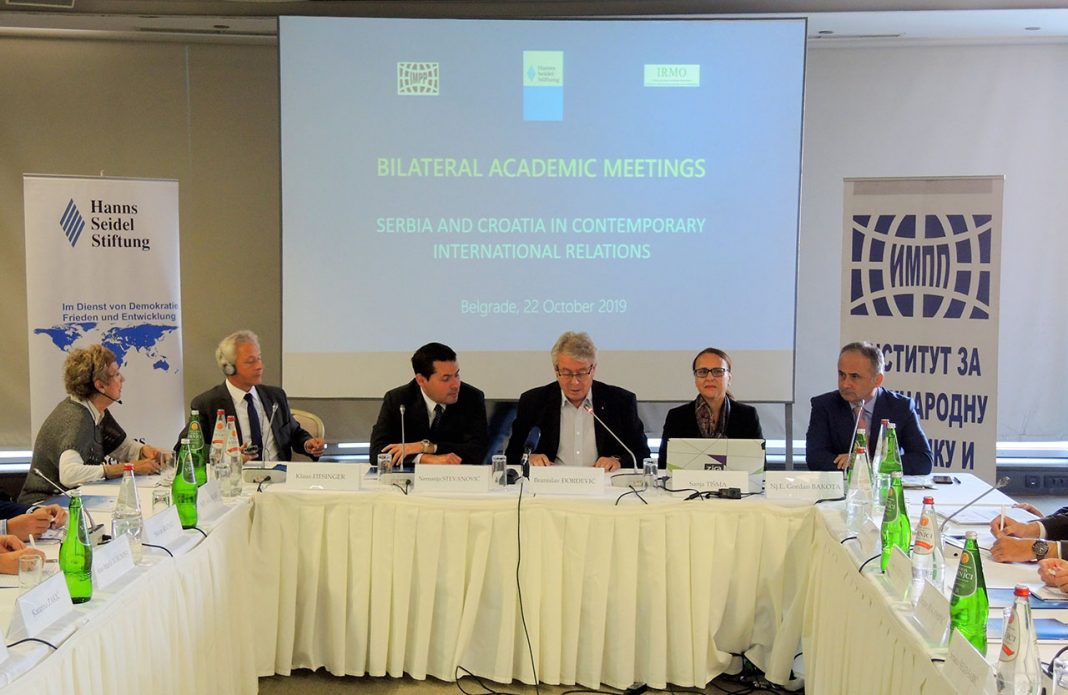 Bearing in mind the vital importance of regional cooperation and good neighbourly relations, the forthcoming presidency of the Republic of Croatia to the European Council 2020, and the need to improve scientific cooperation with Croatia, the Institute of International Politics and Economics (IIPE), Belgrade, and the Institute for Development and International Relations (IDIR), Zagreb, initiated Bilateral Academic Meetings in Belgrade. Bilateral Academic Meetings are established as a forum for scholars and academicians aimed at discussing the political, geostrategic and economic position of Serbia and Croatia in the context of current trends in the politics of the European Union as well as the world politics. This year the forum is entitled “Serbia and Croatia in Contemporary International Relations”, and it was financed by the Hans Seidel Foundation – Office for Southeast Europe. In the opening session, welcome speeches were delivered by Prof. Branislav Đorđević, IIPE Director, Mr. Nemanja Stevanović, State Secretary of the Serbian Ministry of Foreign Affairs, H.E. Mr. Gordan Bakota, Ambassador of the Republic of Croatia to Serbia, Dr. Sanja Tišma, IDIR Director, and Dr. Klaus Fiesinger, Regional Director for Southeastern Europe at the Hanns Seidel Foundation. Appreciating enlargement policy as one of the most successful initiatives in the Union’s external action, H.E. Gordan Bakota called for intensification of dialogue between the two countries, especially given the potential transformational power of Serbia’s EU accession negotiations to resolve bilateral issues with its neighbours.

The first working panel was dedicated to the political dimension of bilateral relations under the conditions of the future Croatian presidency of the Council of the European Union. The panellists were unanimous in their assessment that the upcoming Western Balkans and EU Summit scheduled for May 2020 should encourage and deepen the resolution of the two countries’ open problems. In this regard, Dr. Sandro Knezović pointed to the potential importance of the Zagreb Summit for maintaining the enlargement policy high on the EU agenda, despite the current “Union fatigue”, and addressing priority issues such as Brexit and agreeing on a multiannual financial framework. Prof. Dragan Đukanović drew attention to the fact that Serbia has the greatest number of open bilateral problems with Croatia. He stressed that facing challenges such as protecting the rights of minorities of both countries, defining the border on the Danube, and addressing the issue of the missing persons requires a broader perspective on Belgrade–Zagreb relations, especially given the imperative of consolidating Bosnia and Herzegovina as a common neighbour. Dr. Senada Šelo Šabić added that Serbia and Croatia need to find a solution to the pressing demographic challenges by emphasising the importance of the rule of law and strong public institutions – necessary prerequisites for economic prosperity and stopping the trend of population emigration. Analysing the potential challenges of Serbia in the path towards progressive alignment with the EU Common Foreign and Security Policy, Dr. Ana Jović-Lazić rounded out the first panel.

The potential of economic cooperation between Serbia and Croatia was discussed in the second panel. The implications of China’s increasing presence in Southeast Europe through the “17+1” Initiative were analysed by Dr. Ana-Maria Boromisa and Prof. Katarina Zakić, who both agreed that the proper selection of investments and projects is the key to economic stability and cooperation in the region. Dr. Sanja Maleković and Dr. Sanja Jelisavac Trošić called attention to the vital role of EU regional policy instruments. Institution building, strategic capacity building and networking of stakeholders on different levels of governance are highlighted as some of the most important contributions of such instruments, either in Croatia as a full EU member state or in Serbia as a candidate country. Dr. Jakša Puljiz warned that the prospect of EU membership is not enough to solve issues such as strengthening the competitiveness of the Western Balkan economies, while Prof. Vladimir Grečić added that this fact raises the far-reaching social problems of the region such as unemployment and brain drain.

Whether pointing out the advantages or disadvantages of the European perspective, the participants agreed that comprehensive cooperation between Serbia and Croatia is the initial and most important step towards stabilising the entire Western Balkans region.

More details on the conference are available here >>>