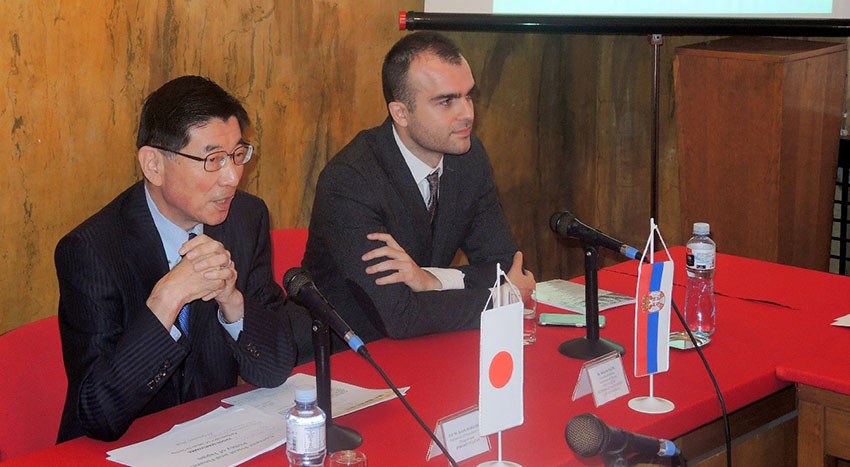 As part of IIPE flagship lecture series, the “Ambassadors’ Forum”, H.E. Mr. Јunichi Maruyama, Ambassador of Japan to Serbia, delivered a lecture on the current Japanese fiscal and financial policy. The “Ambassadors’ Forum” gathered a number of representatives of the diplomatic corps in Belgrade, scholars, academicians, and the IIPE alumni.

His Excellency Maruyama commenced the lecture by presenting quartal development of real GDP with particular reference and comparison concerning private, public and foreign demand. Not only that Mr. Ambassador spoke about population trends in Japan, stressing that in the last few years the population of Japan has been declining, but he also tackled the question regarding measures that should be taken by the state in order to change demographic structure.

Ambassador Maruyama explained the current fiscal situation and emphasised the ever-growing gap between expenditure and revenues, caused, inter alia, by social welfare expenditures increased due to the current negative demographic trends. In order to find the best solution for improving the public health care system – although it already represents a considerable public expenditure – Mr. Ambassador compared the plausible effects that rise of different taxes could have on public revenues. He concluded this part of the lecture by claiming that increased corporate income tax would not have desirable effects; instead, the most suitable solution would be to increase the consumption tax.

Part of the lecture dealt with how bonds affect the growth of gross domestic product as well as forecasts for the next year regarding changes in fiscal policy and public debt, by comparing Japan to the United States and the individual economies within the Eurozone. His Excellency also tackled the issue of economic stability with a view to state dependence on external financing, arguing that Japan did not faced financial crisis as, for example, Greece did, because its revenues come from internal sources.