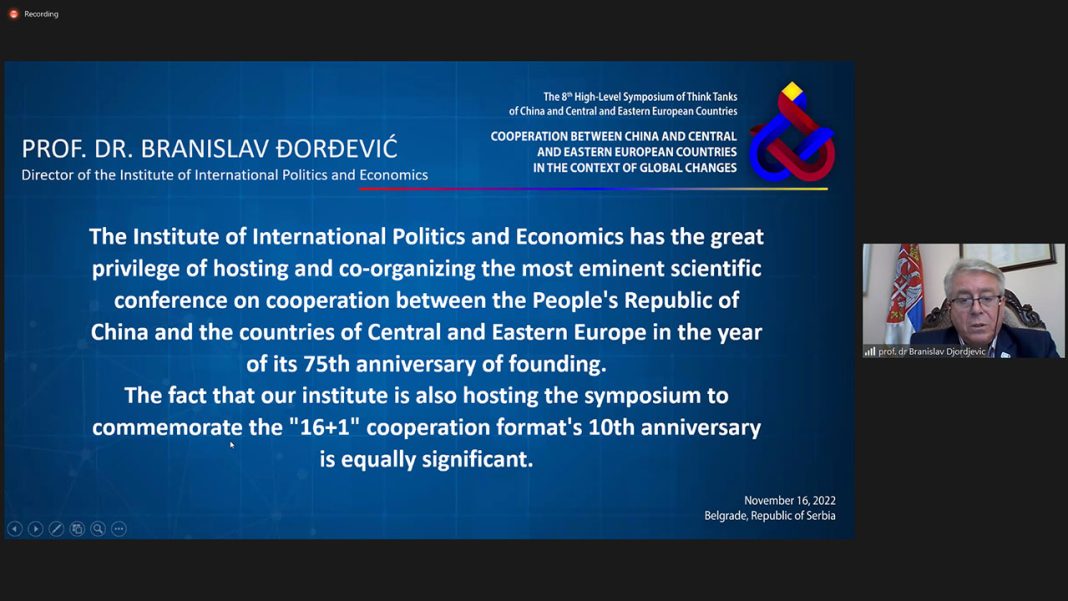 In the framework of the marking of its 75th anniversary, the Institute of International Politics and Economics (IIPE), in cooperation with the Institute of European Studies (IES) of the Chinese Academy of Social Sciences (CASS), organized the 8th China-CEEC High Level Think Tank Symposium.

Participants from 12 members of the China-CEEC format presented 30 scientific papers at the symposium, entitled Cooperation between China and Central Eastern European Countries in the Context of Global Changes.

The symposium was opened by First Deputy Prime Minister of the Government of Serbia and Minister of Foreign Affairs Ivica Dačić, who said that „as we mark the 10th anniversary of the mechanism of Cooperation between China and Central and Eastern European Countries, we are particularly proud that Serbia is hosting the Think Tanks Symposium for the first time“.

„Simultaneousy, the Institute of International Politics and Economics, one of the co-organizers of today’s event is celebrating 75 years of successful work“, Dačić said, adding that „all of this indicates that we have plenty of reasons to be pleased“.

„The success achieved so far is best reflected in the fact that the volume of trade in goods between China and CEE countries has grown significantly in the past ten years, by as much as 142,6%, reaching a figure of 136.2 billion dollars in 2021”, the foreign minister underlined.

He announced in the coming period “additional joint efforts with the aim of further intensifying cooperation within the China-CEEC format, which has proven to be outstanding for the preservation of old and the development of new forms of cooperation”.

“Serbia wishes to continue improving and strengthening its cooperation with the People’s Republic of China, which it considers a reliable partner, a sincere friend and one of the most influential political and economic factors in today’s world”, Dačić said.

The ceremony was also attended by Zhao Qi, Secretary-General of CASS, the ambassador of the People’s Republic of China to the Republic of Serbia H.E. Chen Bo, the ambassador of the Republic of Serbia to the People’s Republic of China H.E. Maja Stefanović, as well as the representatives of the organizers of the symposium – IES Secretary-General Feng Zhongping, IIPE Director prof. dr Branislav Đorđević, the vice-President of China Foundation for International Studies H.E. Xu Jian and the Counsellor of the Secretariat of China-CEEC Cooperation Xia Xiaoxi.

“The China-CEEC cooperation has become a good example of cross-regional cooperation and a living example of multilateralism, with positive effects around the world”, Zhao Qi said.

Ambassador Chen Bo said that, despite the progress since the founding of the format in 2012, the China-CEEC cooperation in the last several years is taking place in a changed international situation, in which “unilateralism and protectionism” are on the rise, which represents a new challenge.

“There are some comments pointing out that we could have accomplished more, that we could have realized our goals faster. But we should be aware that this subregional format of cooperation, as well as even much bigger formats and mechanisms of cooperation, cannot operate in isolation and cannot be excluded from negative impacts and flows on the global level”, said Ambassador Stefanović.

Director of the IIPE Prof. Branislav Đorđević underlined that „we are aware that China-CEEC cooperation is not immune to criticism“.

„While some criticisms are constructive and beneficial, others many not be and may even cast doubt on the cooperation format. Although this challenge is difficult, we should not lose focus, give up, or run away from the problem“, he said.

„Today’s crises are multidimensional and interconnected, and, therefore, true solutions can only be found within the framework of multilateralism, which includes respect for equality among countries, their diversity, and common grounds for finding sustainable solutions“, the IIPE director said.

The director of the IES CASS Feng Zhongping underlined that one of the problems for China-CEEC cooperation is the fact that the EU increasingly looks at China as an „economic and technological competitor“, and that in the context of the Ukrainian conflict the strenghened transatlantic unity is affecting China-EU relations.

Four panels were organized during the symposium, focusing on the 10th anniversary of the China-CEEC format, the geopolitical challenges, as well as cooperation in the economic, cultural and communication spheres.