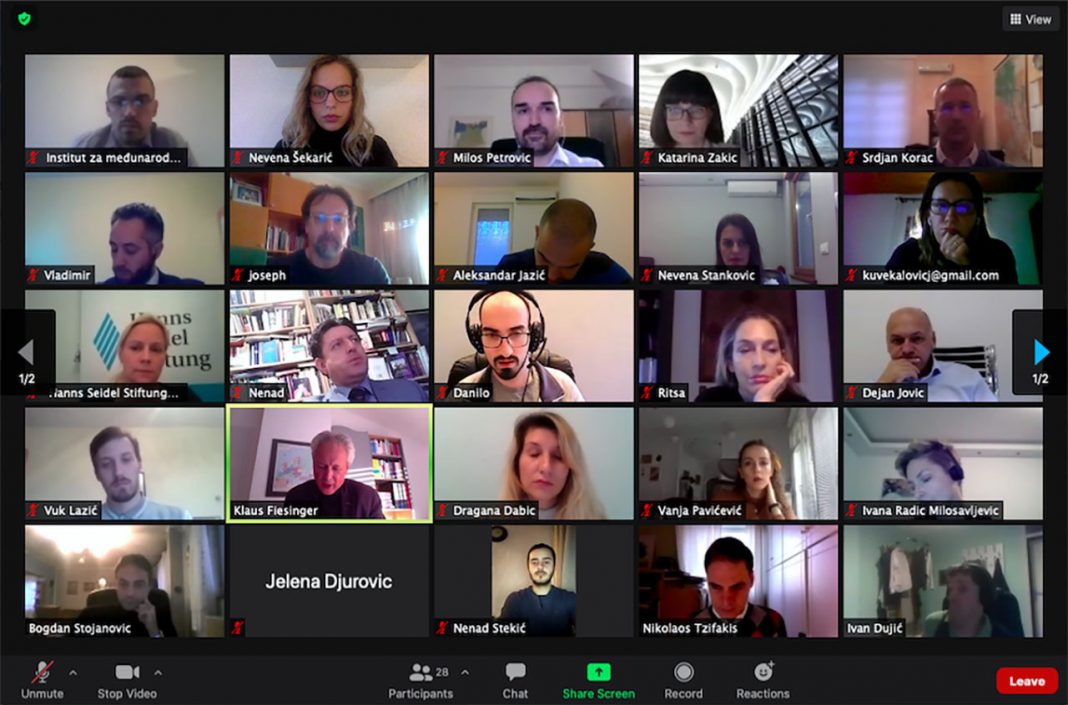 Institute of International Politics and Economics (IIPE) and Hanns Seidel Foundation organised a webinar dediated to the position of the Western Balkans during the new mandate of the European Commission in the context of the Covid-19 pandemic. Following the greeting speeches of the IIPE representatives and the introductory lesson of Dr Klaus Fiesinger, the Hanns Seidel Foundation`s regional director for Southeast Europe, on EU support to reform processes in the Balkan countries, presentations within the two thematic panels ensued. The participants discussed the limitations and challenges in the European integration process in the Western Balkans and the consequences of the pandemic, but also touched upon potential changes in trans-Atlantic relations following the 2020 USA presidential elections. Presenters agreed that the Covid-19 pandemic significantly impaired the development perspective of the Western Balkan region, as well as the EU role in that area, especially during the first months of the pandemic crisis. Prof. Dejan Jović, Faculty of Political Science at the University of Zagreb, stated that, among other things, the pandemic crisis also contributed to the rise of sovereignist logic and disruption in terms of enjoying the rights and “EU freedoms”. Lecturer at the Masaryk university in Brno, Dr Vladimir Vučković, deliberated on deficiencies of previous EU enlargement approach and pointed out that greater credibility of enlargement policy is needed. IIPE researcher Dr Miloš Petrović expressed hope that the European Union’s revised enlargement methodology might provide an impetus on the Western Balkans’ EU path and somewhat reduce previous deficiencies. Prof. Nikolaos Tzifakis from the University of the Peloponnese identified that the Western Balkans remained significantly vulnerable in crisis situations and that previous reactions left little hope towards articulating a common regional approach in battle against the Covid-19. Dr Ritsa Panagiotou, senior research fellow at the Centre for planning and economic research in Athens, considered prospects for realization of EU financial programs such as the Economic and Investment Plan, which might provide significant economic boost to the Western Balkan development. Dr Ivana Radić Milosavljević, Lecturer at the Faculty of Political Science at the University of Belgrade, noted that the processes initiated by the European Union raised numerous questions, including the possibility for gradual and selective integration, but also referred to overcoming an old problem – exploiting the Balkan candidates’ accession process for addressing the bilateral disputes with neighboring countries. Prof. Joseph Michael Gratale from the American College of Thessaloniki held a lecture on the topic of political communication and so-called “Twitter diplomacy” which characterized the American presidency of Mr Donald Trump. As part of the discussion, the participants deliberated on negative effects of the pandemic for the international democratic development, as well as about boundaries to EU influence in its geographic neighborhood.