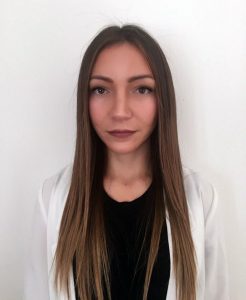 Sandra Davidović joined Institute of International Politics and Economics in November 2018. The core areas of her academic interest include contemporary Balkan relations, the political system of the European Union and its Common Foreign and Security Policy, conflict resoultions and international law. Currently, Sandra is PhD candidate at the International and European Studies Programme at the Faculty of Political Science, University of Belgrade, where she defended master thesis Privatization of Socially-owned Enterprises in Kosovo 1999–2009, and had completed undergraduate studies in International Politics. During her master studies, she was aidee in graduate course in International Business Law. During 2017 and 2018, Sandra worked on research projects conducted by the Belgrade Forum for a World of Equals, under the auspices of the Office for Kosovo and Metohija Government of the Republic of Serbia, wherein she carried out a study “Privatization of Socially-owned Enterprises in Kosovo under the Auspices of the UNMIK Administration”. Sandra authored and co-authored several research articles in domestic and international publications, with a special emphasis on the Kosovo issue. In addition, she has participated at a dozen conferences and seminars in Serbia and abroad. Sandra is a scholarship holder of the Ministry of Education, Science and Technological Development of the Republic of Serbia and the City of Kragujevac, as well as of the Studenica Foundation, the Sakura Foundation, the Erhard Busek Foundation, University of Stockholm, the European Forum Alpbach.