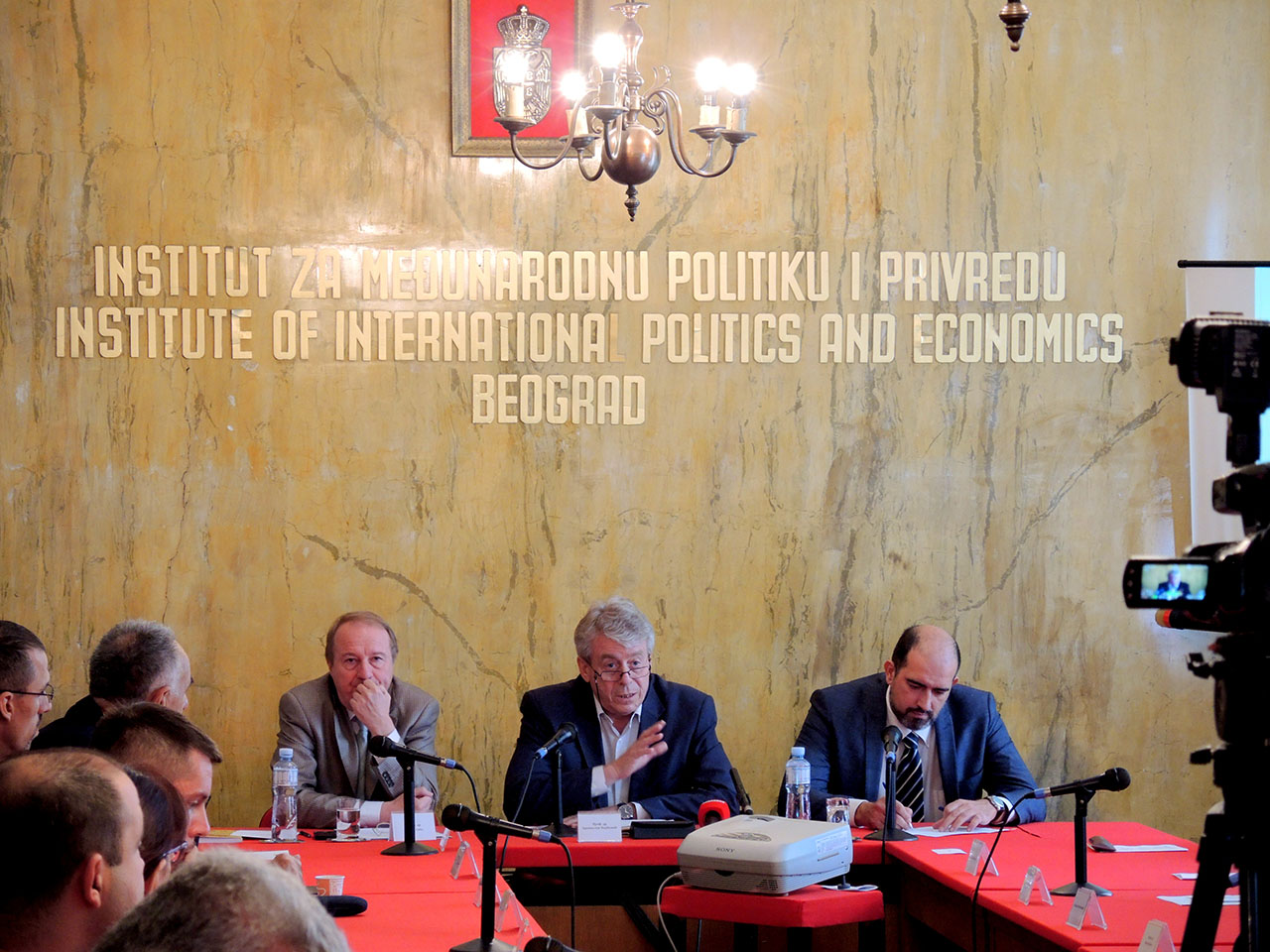 Institute of International Politics and Еconomics organised conference “Energy Security and Energy Diplomacy of the Republic of Serbia”, with the support of the Serbian Ministry of Mining and Energy. The conference was opened by Professor Tibor Sabo, Assistant Minister of Education, Science and Technological Development, and participants were also greeted by the IIPE Director Professor Branislav Đorđević. The conference gathered ten presenters from the leading scientific institutions in the country discussing the current issues related to the national energy security and energy diplomacy as well as considering the plausible ways of providing energy security in the current unstable and unpredictable constellation of regional and international relations.

In the keynote presentation, Dr. Vladimir Trapara, Head of IIPE`s Centre for Euro-Atlantic studies, focuses on re-questioning of the concept of energy-security dilemma in the confounds of the study of energy security as a whole. Dr. Trapara identifies the existence of the functional differentiation of states in the confounds of the energy-security dilemma and makes a differentiation on the import-states, the export-states and the transit-states, where each is faced with specific security interests and challenges. He concludes with the comparative analysis of the influences which security as well as energy-security dilemma make on states.

Professor Petar Stanojević, Faculty of Security Studies at University of Belgrade, presented the analysis of the paradigm change of energy security in the international arena. Putting Serbia within the scope of the new conditions, Stanojević sees slim possibilities for the usage of potentials of our country. Dr. Vladimir Ajzenhamer, Lecturer at Faculty of Security Studies, University of Belgrade, discusses the energy security policy of Turkey and gives hints how it affects the position of Serbia. He introduces the emotional component in analysing the behavioural determinant of international actors when faced with the energy-security dilemma. Observing the Republic of Serbia through the same theoretical lenses, Ajzenhamer provides an explanation of the lack of energy infrastructure through fluid and undefined „emotional code” of Serbia, which produces passive reaction to the energy-security dilemma. Focusing specifically on the mining basin “Kolubara”, and its role in the national energy security, Professor Milorad Đoković, Faculty of Diplomacy and Security (Belgrade), emhpasizes that 30% of reserves had been already used, and privatisation hadn`t produced satisfactory results, so the optimal solution is to find strategic partners and open new mining basins, which all should result in improvement of the Serbian economy. Selected Europe as a region within which discussion on energy security is relevant, Professor Mitar Kovač from the Faculty of project and inovation management at Educons University talked about the strategic constraints of European energy security and energetic resources of Russia. Although he accepted that current trends have the potential for satisfying the European market, Kovač believes that the situation is being complicated politically or, precisely, the claims made by some states that Russian resources should not exclusively be the property of Russia. Professor Kovač concludes that energy will be the key factor in finding a solution for the security dilemma of Europe.

Second panel was dedicated to the thorough explanation of the concept of Energy Diplomacy, where the first speaker was the former ambassador Dr. Srećko Đukić, a member of European Movement in Serbia. Dr. Đukić took a strong stance on the lack of special sector at Serbian Ministry of Foreign Affairs dealing with energy policy (which existed during Yugoslavia), and he concludes that Serbian energetic diplomacy is static. Lt. Colonel Branislav Milosavljević, Institute of Strategic Studies at University of Defence, highlighted that the issue of energy security is in the focus of new strategic concept NATO 2020. Since 80% of natural gas in Serbia comes from Russia, Milosavljević warns that the so-called Southern Gas Corridor cannot be the only pillar of Serbian energy security, even though the European Union pushes for it. Tanja Milošević from the Military Academy (University of Defence) put forth new estimates according to which Maghreb countries (Algeria, Marocco, Tunisia and Lybia) emerge as the new important energy suppliers and, thus, can become the alternative source of Serbian energy security in the 21st century. Dr. Dušan Proroković, Head of IIPE`s Centre for Euroasian Studies, examined the US energy security highlighting the different approaches of Obama and Trump regarding this strategic issue. Proroković advocates the position that we cannot expect in the near future, i.e. the end of the confrontation between Russia and USA, and warns that the US will continue to confront about the Iranian nuclear programme.